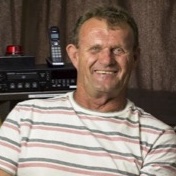 I discovered Community Radio when I was working for the Nambucca Shire Council. I found myself listening to all this great music, and it was my kind of music. Three weeks after we retired, 2NVR were doing a training course for new presenters, and that was that.

I began presenting Dyer’s Loop at 2NVR in 2016, with my wife Robyn. Robyn dropped out in 2019, due to family commitments. It would be fair to say my music is a little bit different. My taste in music is wide and varied, hence our promo song, by the Triffids, “Wide Open Road”

The music I play is 85% Australian content, from the late 60’s to yesterday, and covers Blues, Folk, Rock, Alternative and Americana.

In recent years, we have attended many Australian music festivals, such as Port Fairy Folk Festival, Blues on Broadbeach, Dorrigo Folk and Bluegrass Festival and the Bellingen Winter Music Festival. At these festivals we have discovered many brilliant Aus- tralian musicians. We just had to share their talent with our listeners. A lot of these musi- cians have large following’s overseas, but most Australians have never heard of them.

I was born in Bowraville and spent the first 19 years in the valley. Back in the seventies, there were only two radio stations to listen to, which were predominantly country and western. To get modern music we listened to the radio at night, where we could pick up Sydney and Brisbane stations playing all the latest music from around the world.

Heavy metal was in full swing about this time, so don’t be surprised to occasionally hear Led Zeppelin, or Pink Floyd, in the play lists. My children were teenagers in the 90’s so
there’s always a lot of this music there as well. But predominately, it is newish music you will hear. I go through all the new Australian music released in the past week, and if I like it, I play it.
When I started doing Community Radio, I had one C.D by a female artist. Now I have too many to list.

I have always loved music. Being a presenter on 2NVR has made me realise how many talented musicians we have in this country.

Dyer's Loop
Music to dye for. A great mix of aussie alternative and featured artists, many from live music performances around Oz.