Currently, we're listening to weekly episodes of "Suspense" and "Gunsmoke", with various other content such as "Escape", "The Strange Dr Weird", "Dimension X", science fiction short stories from Librivox, and monologues and short plays from Canberran writer Bart Meehan and Artsound FM, along with various plays and short stories produced with the help of the CBF right here on 2NVR back in 2013.

"Suspense", one of the premier drama programs of the Golden Age of Radio, was subtitled "radio's outstanding theater of thrills" and focused on suspense thriller-type scripts, usually featuring leading Hollywood actors of the era. Approximately 945 episodes were broadcast during its long run, and more than 900 still exist.

"Suspense" went through several major phases, characterized by different hosts, sponsors, and director/producers. Formula plot devices were followed for all but a handful of episodes: the protagonist was usually a normal person suddenly dropped into a threatening or bizarre situation; solutions were "withheld until the last possible second"; and evildoers were usually punished in the end.

In its early years, the program made only occasional forays into science fiction and fantasy. Notable exceptions include adaptations of Curt Siodmak's Donovan's Brain and H. P. Lovecraft's "The Dunwich Horror", but by the late 1950s, such material was regularly featured. 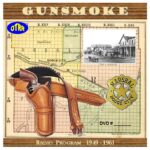 "Gunsmoke" is one of those long-running classic Old-Time Radio shows that everyone knows and remembers. It's also one that is still respected for its high values, in all aspects. Gunsmoke first aired on the CBS network on April 26, 1952, billed as the first adult western. It was set in Dodge City, Kansas in the 1870's.

The main character, Matt Dillon, was played by William Conrad. On August 6, 1951, William Conrad played the lead in a show entitled "Pagosa" in the series Romance, where he played the part of a reluctant sheriff in a tough Western town. Although not a true audition, Conrad's character role is very close the that of Matt Dillon in Gunsmoke. It was one of the "stepping stones" toward the production of Gunsmoke.

The series featured top-notch acting and well-developed scripts that set it apart from many other shows, not only Westerns; however, it was the sound effects that stood out the most. Listen carefully and one can hear many levels of sound that really helps transport the listener back to the old west.

Besides the US version, there was an Australian production of Gunsmoke. It began sometime in 1955, transcribed under the Artransa label, and aired Mondays at 7:00 PM on the Macquarie network. It is not known how many shows aired or how long the series ran.